BirdLife Werribee and Birds of the Werribee Catchment

Birds are a key component of many eco-systems – and being in general large and easily seen they are an important indicator of the health of the area. We are fortunate to have a large variety of birds in the NatureWest area – more than one third of Australia’s bird species have been seen at one location, whilst the region as a whole has played host to at least 330 species of bird (more than 40% of the Australian total), ranging from Australia’s smallest bird (the Weebill) to one of the largest (the Brolga) and one of the rarest (the Orange-bellied Parrot).

Many of our birds are residents, and stay in the area all year round, but others are migrants who come and go with the seasons. Their paths to us are many and varied – some spend the winter here and the summer in Tasmania (such as the Swift Parrot, although that often just passes through on its way further north), the High Country (the Flame Robin) or even New Zealand, whilst others come for the summer – either from further north in Australia or SE Asia or the Arctic! Yes, many birds – in a group called waders, which includes the Red-necked Stint – spend our winter months in the Arctic breeding and then, as the cold creeps in, fly to Australia for our summer months before heading back again to repeat the cycle.

Great places to bird include the Western Treatment Plant in Werribee (generally recognised as one of the best places to see birds in Australia, although access is by permit only), the You Yangs, Serendip Sanctuary, the Brisbane Ranges, Newport Lakes, Jawbone, Lerderderg Gorge and various remnant woodlands between Werribee and Melton.

The region is home to an active birding club – BirdLife Werribee, formerly known as the Werribee Wagtails, who run around 20 birding activities each year. In addition Hobson’s Bay and Melton Councils run birding activities, and other organisations such as the Geelong Field Nats and branches of BirdLife Australia often come to this area to go birding.

The region is home to more than 330 species of bird as listed below. This data has been compiled using eBird (formerly Eremaea), the Checklist of the birds of the Western Treatment Plant and other sources.
Photos are from BirdLife Photography and will open in a new tab/window. Descriptions are from Birds In Backyards (where available) and will also open in a new tab/window. Both of these sites are run by BirdLife Australia - Australia's main birding organisation - and we would encourage anyone interested in birds to join them.
Sighting information is from the eBird online database - for technical reasons the map covers an area bigger than the NatureWest area. Click on a marker to get details of records at that spot - the default is all sightings in the last 10 years, but you can adjust that using the screen controls. (Note that for species which have not been seen in the specified timeframe the map will be expanded to show sightings in other areas).
Note that eBird,BirdsInBackyards and BirdLifePhotography are not controlled by NatureWest and we can take no responsibility for the information on their sites.
Note that different sites use different names for some birds and some of these are given in parentheses. The birds are in what is called a "taxonomic sequence" - similar birds are grouped together in families - rather than alphabetically. Species marked as "Rare" have occurred in the area but are unlikely to be seen - some of these are normally found in other parts of Australia (where they may be quite common) whereas others come from other countries. Some birds are widespread in the area, and others have very specific habitat requirements and only occur at a few locations.

Our History and Newsletters

This page is under development - newsletters will be uploaded progressively.

The history of the Werribee birding group - which has had a few name changes but has mostly been called the "Werribee Wagtails" is best seen through its newsletter - the "Werribee Wag-tales". Since the inception of the group until mid-2014 this was edited by Shirley Cameron - the founder and for many years President of the group. Unfortunately some newsletters are missing, and others are only in a bound volume and impossible to copy, so this is a fragmented account - any contributions will be gratefully received.

Thanks to Shirley Cameron, Denis O'Connor and Carole Popham for their assistance with this article.

Carole records that the group went to Pt Wilson in Feb 1995 and Ballarat in April - the earliest document I can find is a bird list apparently from April of that year which is presumable from the Ballarat trip. It also details future outings to Serendip in May and the You Yangs in June – both of which involved admission fees in those days.

The June newsletter advertises a talk by local birder Rohan Bugg, and proposes trips in August to the Saltworks, in September to the Brisbane Ranges and on the Community Bus to Clarkesdale (Linton) in October. The group was now called the Werribee Older Adult Bird Watchers – apparently because the bus was for “Older Adults”!

The next newsletter dates from July – (when Carole’s records have the group going to Trentham and Daylesford), but unfortunately we have no record of the May, June and July outings and makes arrangements for the Pt Lillias (Avalon Beach) and Kirk’s Pt outing in August. The August newsletter has a brief report on this outing, and makes arrangements for a September trip to the Brisbane Ranges – unfortunately we have no record of that trip.

Our next newsletter reports on the October trip to Clarkesdale (Linton) and the final newsletter of the year reports on the Cheetham Wetlands/Pt Cook outing in November and discusses the plans for a WTP trip in Dec – which we have no record of.

A very lean year for reports unfortunately. The only newsletter contains details of a trip to the WTP in December and refers to the places that were visited in the year.

The year got off to a slow start – the first newsletter (in March – only a paper copy exists) states that there have been no outings so far. The next newsletter (April) has full details of a visit to the Bellarine peninsula and makes arrangements for a May walk on the Werribee River, but we have no report on that – presumably it is in the missing 3rd edition of the year. The 4th edition in June details a further walk on the Werribee River (from Riverbend to Shaw’s Rd) and makes plans for another river walk in Jul – which is presumably reported on in the missing 5th edition. The 6th edition details an August outing to the Mansion, and the next edition reports on a Sep trip to Cobbledicks and has plans for a slide night. The 8th edition reports on a bus trip to Jells Park and Westgate Park in October – we only have a paper copy of this. We know the group planned to go to Anakie Gorge in November but there is no record, and the year ends with a bird list (but no report) of a Dec trip to Pt Lillias (Avalon Beach) and Kirk’s Pt.

We have reports of a March visit to the WTP, an April visit to the You Yangs (paper only), May to Anakie Gorge, June to Newport Lake (paper only), July to Melboure Zoo, August to the Werribee River, September to Cherry Lake, October to Point Cook/Cheetham Saltworks and a bus trip to the WTP and a bird list for another visit to Pt Cook in November. There were plans for a visit to Melbourne Botanic Gardens in December but no report is available.

A full calendar apart from January and December – and I know that for some years the group did not go out regularly in those months. We have newsletters for January (no outing but a report on bird-banding at the WTP), the outings in February to Barwon Heads (including the news that the group had seen 143 species since starting),  March to Avalon Beach and Kirk’s Pt, May/June to Newport Lakes, Altona Beach and Cherry Lake and Cobbledicks Ford (along with articles on the problems of rubbish dunping at the WTP and the Black Swan banding project which is still running today (2014)) and a bird list which I believe to be the July trip to Werribee Gorge.

We have no reports on the April trip to Eynesbury and only paper newsletters for the August (Hovell’s Creek), September (Jawbone and Westgate), October (Organ Pipes) and November (WTP) outings.

The first activity of the year was to Laverton Lakes (? – possibly Cheetham wetlands?) and Jawbones, and is described in the first newsletter along with some notes about the “Bird Observer” and forthcoming destinations.

There is only a paper newsletter for the Match (or was it April?) outing to Pt Lillias and Kirk’s Point (there seem to have been a lot of trips there in the early days – nowadays the road is almost impassable except with a 4WD so maybe it was better then?). There is also an article on a visit to the You Yangs in “late Indian Summer” which I have guessed at April – but Carole thinks could be June! There is no report on a late April visit to Braeside unfortunately or the June visit to Long Forest.

We have a July list for the visit to Jerringot, Ironbark Basin and Anglesea and a brief August report of a trip on parts of the Werribee River. There is a brief report of the September trip to Anakie gorge but nothing for the October Healesville and November WTP visits – apart from a bird list that is presumably from the WTP.

The first newsletter of the year has Dave Torr shown as President, so obviously there was a changeover at some time - when is not recorded!

Note the December outing to Altona is covered in the first newsletter of 2013.

In August David Jenkins took over as editor, taking over from Shirley who had done the job since the group started. In the same month our application to become a branch of BirdLife Australia was approved, making us part of a mational organisation with 65,000+ supporters (and an international organisation of 10 million+ supporters), and we also celebrated 10 years of surveys at Pinkerton Forest with PLEG.

As from December, we have been issuing the newsletter in a small and large version - the large version contains higher resolution photos which are much more suitable for display on large monitors, but the files are typically mre than 10 MB where as the small versions are around 1 MB and quite suitable for mobile devices and small monitors

We have been doing quarterly bird surveys at Pinkerton Forest and Bush's Paddock (in association with PLEG) for the last 10 years, and for most of that time we have also been surveying the birds in Eynesbury forest.

This summary shows our findings overall and for some key birds.

I found this set at my local Op Shop.  I thought I should share - Colleen Miller 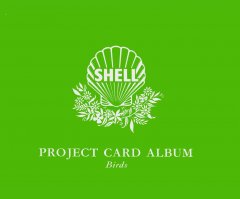